Today's Ask Miss Caro-chan features a question I got on my formspring regarding wearing Lolita in public for those who might be a bit shy about standing out.

Any tips for going out in public dressed in lolita? Especially if you are by yourself? How should I react if I get mean comments? What is the best way to try and to help ignore some odd stares?

This is something nearly all Lolitas have to deal with, even the ones who don't mind the odd stares and sometimes mean comments. It takes a lot of courage to go out in public wearing anything out of the ordinary, and even the most toned down Lolita is considered strange by many. There's no real sure fire way to make sure you have the courage to prance around outside with a cake on your head, but there are a few things you can do that can help you work up the nerve to do so. 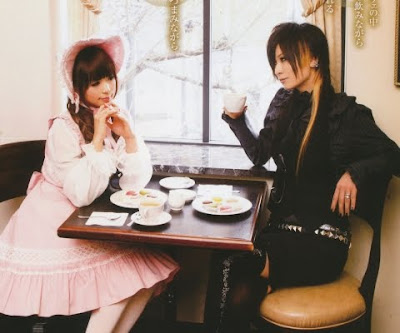 Personally, I've been dressing, well, let's just say "abnormally" or "with questionable taste" since I was in middle school, so wearing Lolita was really not that big of a step outside of my comfort zone. But that doesn't mean I am always prepared for the attention that outlandish fashions tend to attract! There are a number of things I've learned in my years of wearing weird clothes and I'd like to share them with you all in this post.
There really is no "right" way to react to mean comments, because mean comments aren't right to begin with. But generally, it's best to not make a huge commotion about them. Most people who say nasty things to other people are just trying to feel superior in some way or to start something, and the best you can do in that situation is to refuse to even acknowledge their "superiority" and to deny them the satisfaction of a reaction. With that in mind, I've found that I actually get many more positive comments and compliments than negative ones while out and about in Lolita!

How do you deal with the stares and comments of wearing Lolitas in public? Do you find that ignoring it is the best option? Or are you much more vocal about letting people know you don't care for comments!? Or, perhaps, are you lucky enough that no one really bats an eye when you go out decked in your frills and ruffles?
Posted by caro-chan