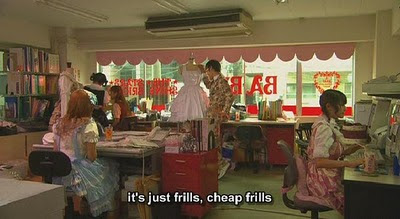 A screen cap from the movie Kamakazi Girls

Note: This post isn't meant to imply that if Lolita brands did these things they would be rolling in the yens, just that there are some things that I feel brands do that hold back a lot of girls from ever really being able to get into Lolita. Again, this post is meant as kind of a rant/pipe dream, not me trying to assume I know how businesses work XD

Lolita brands tend to cater to a niche market, and that niche is typically petite girls who want to wear expensive and eccentric high-end clothes. As you all know though, not all Lolitas are petite, or even interested in wearing something known for being expensive, many Lolitas simply want to be able to buy and wear their favorite style of clothes. But, because the typical Lolita is not the Lolita that most brands make their clothes for, she is left out in the cold. Yes, there are many brand Lolita pieces that can fit a variety of sizes, and buying second hand can help bring down the cost, but buying whatever the hell you want, directly from the brand is not something your average Lolita will ever bother with, or sometimes even be able to do.

It is true that in the past year or so many Lolita brands have indeed expanded their shops to Western shores, either literally, in Baby's case, or through at the very least releasing an English web shop that ships overseas. Along with this, Baby has begun releasing a few select dresses in large size, and even on occasion an extra large. These are big steps from clothing stores that several years ago wouldn't even ship overseas and typically made one size of dress that is anything but "one size fits all". But I think it is a far cry from what Lolita brands can be doing to make both their clothes, and thus Lolita in general, more accessible. I also feel like if Lolita brands addressed some of these issues, fewer Lolitas would be so eager to throw their money at poor quality knock-off shops.

The following list might all just be dreams of mine, but I feel that if Lolita brands did these things, Lolita would be even bigger than it is now.

Will brands ever do some of these things? I doubt it. But why is it? Is it the cost? I know that it is cost effective for a brand, especially one that sells to such a specific niche, to make only one size of clothing, but I honestly do believe that most brands can indeed do things like offer every dress they sell in multiple sizes, many other brands that cater to alternative fashions do. I just don't think Japanese Lolita brands are willing to. Many Japanese brands, both Lolita and otherwise, tend to make their clothes in smaller quantities, and smaller sizes, to keep them exclusive, and thus, make them even more special than a $300 pink princess dress already is. It makes the clothes, the brand, and every one wearing them part of something more exclusive than it really needs to be. Someone really needs to send Mana a note letting him no that he's not actually Christian Dior, no matter how high he prices his clothes.

I am not going to deny it, I have a love hate relationship with Lolita, especially Lolita brands. On one hand, I love Lolita, it's what I wear nearly every day, it's what I spend large amounts of time and money on, it inspires me, and I just love it and I can't help it. On the other, I hate some of the stuff Lolita brands do, I hate their stupid sizes, I hate their blatant over pricing (No, I'm not talking about their dresses, which I think are reasonably priced for the most part, but things like injection molded plastic jewelry, pleather shoes and purses that are on par with PayLess quality, and most cutsews), and I hate the elitist attitude that many brands seem to have. I want to love certain Lolita brands unconditionally, but I just can't, and don't think think I ever will be able to unless they start to change how they do things. But, then again, should I really trust anyone who asks for hundreds of my dollars, even if it is in exchange for pretty party dresses?

If you're interested in a response about why these things probably aren't going to happen (and a few things that I was just plain wrong about, oops XD) check out this response from The Osaka Koneko.

So, fellow Lolitas, agree or disagree? Do you think brands run just dandy the way they are, or would the brand of your dreams run things a little differently?
Posted by caro-chan