How Many Lolita Crafts Can I Finish In A Month? 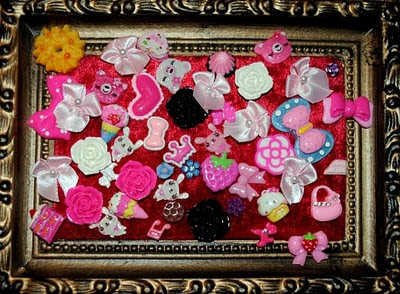 Some of my growing deco hoard!

Late last night a Lolita panel and a table in the vendors room for the upcoming U-con just kind of fell in my lap. Which is pretty cool, except for the fact that the convention is less than a month away! So I am going to be spending the next month slaving over a hot glue gun and needle-nosed pliers to build up a selection of Lolitay crafts. This convention is much smaller than the 2 other anime conventions in the area, and this is the first year they will be hosting it, so I'm not exactly expecting it to be Lolita central, but it's still something fun and frilly for me to do for a weekend! I've never hosted a panel at a larger convention, and I too often forget to even go to Lolita panels, so this will be something completely new to me. Luckily I have my friend Rayray, of Part Time Lolita, to help me with the panel, who is a bit more experienced with conventions than me!

This is also a really good opportunity for me to start working on an idea that I have been toying with for a while, and that is to start my very own brand. A burando of their own is pretty much every crafty Lolitas dream and I hope to have, at the very least, a place on Etsy to call my own in a few months. Now, I'm no seamstress, so I will be selling the varied accessories that I like to craft together. If you've been following me on Twitter you probably are aware that my latest craft adventure has been making stiff brimmed bonnets the old fashioned and sometimes incredibly frustrating way with a buckram and wire frame. I have just about perfected my bonnet patterns, both a half bonnet, and a full backed bonnet, as well as a mini tricorn hat. For the brand I call my own I plan on making mostly Gothic/Classic pieces such as bonnets, fascinators, corsages, and beaded necklaces, but I do also plan on making and selling pinker, cutesier, and generally more kawaiier things like hair clips, deco pins, rings, necklaces, and possibly even a few cake slice headbands just because I really enjoy making them. I have even been kicking around a couple different names for my dream brand!

I was just going to plan this without any kind of official blog announcement until I had everything ready, but telling you all about it really makes me motivated. Announcing my intentions is my first step to making it official, I can't back out now XD!

If any of you are from Connecticut, you might want to check out U-con, it looks like fun! In the mean time, I'll be updating with my Lolita craft progress using the "craftathon" tag on my blog.
Posted by caro-chan