Star Night Theater is one of Angelic Pretty's newest series, but I just can't seem to get it into my head that it's actually an Angelic Pretty print. Every time I see it I think it's Metamorphose. 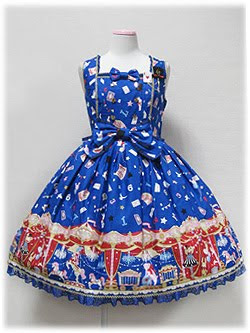 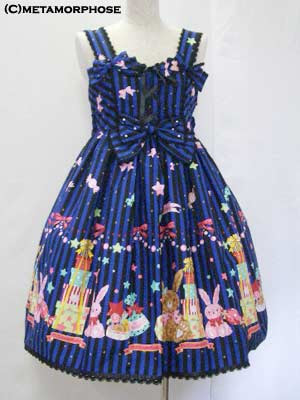 Angelic Pretty Star Night Theater vs. Metamorphose Candy Star Rabbit
Star Night Theater's Meta-ness had got me thinking about what makes Meta's prints so obviously Metamorphose. While some brands do tend to have their own signature colors or color schemes, most brand colors tend to fall into the pastel range. Angelic Pretty is known for their contrasting pastels, and many Classic brands are known for dusty or faded pastels. While Metamorphose is more apt to use much brighter colors. Bright blue, burgundy with a hint of purple, nearly neon pinks, and vivid reds are all often seen in Meta's prints, much more than they are seen in other brands. Metamorphose also isn't afraid to have a few of these colors clashing together in the same print. When Angelic Pretty features a dress in these colors, combined with their usual clustered print, it just looks so much like Metamorphose. Which kind of gets me wondering why people are so excited about one, but passing up the other. But, I know the answer to that, Angelic Pretty is just the more popular brand and many people even find Meta to be a cheaper Lolita brand, just a step above Bodyline.

Which of these two dresses would I rather have? Eh, neither of them. While they both look like fun to coordinate with, they are just too "play room wallpaper" for my tastes.
Posted by caro-chan