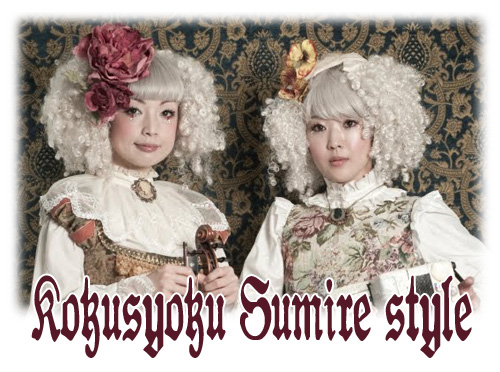 Kokusyoku Sumire is a band that many Lolitas are familiar with, for both their unusual music style and their quirky almost-Lolita fashion sense. Musically, they might not be everyone's cup of tea, but it's hard to deny that their sense of style is amazing!


To add some Kokusyoku Sumire style to your coordinates try some of these tips!

I want to talk a little bit more about their very loose definition of Lolita a bit more before I finish this post! Personally, I absolutely love their fashion sense (even the more ridiculous things!), and what I love most about it is how varied it is and how it's not always purely Lolita, and yet, it still manages to have a very Lolita sense to it. I think that any Lolita, especially those of us who wear the style on a very frequent basis or any other types who are prone to get into style ruts, can really learn a lot from their style, even if they don't particularly want to emulate it. It seems like so many Lolitas are very worried about being Lolita and terrified of being only sort-of-Lolita, of having outfits that aren't quite Lolita or aren't Lolita enough.

This idea of "Lolita-esque" has really helped me a lot when it comes to simply trying to find clothes for the day! I was never a big on worrying over how Lolita my outfits were but it is nice to have a style icon to look up to, and it's nice to know that too-long dresses, not wearing a petticoat, odd accessories, unusual prints, not-often-seen color combos are all perfectly okay so long as you love them.

These two lovely ladies can make things like aqua party dresses and white dual-afros or tutus and gigantic neck ruffs work because they are obviously having fun with it. If Sachi and Yuka came on stage and apologized because their pink socks weren't the exact same shade of pink as their dress, and gave you an excuse as to why their petticoat isn't as full as it should be, they probably wouldn't be as nearly as inspiring as they are now.